The Problem is in the Room

Upon returning from any gathering or conference, it often takes a while to process what you’ve learned. So many ideas, thoughts, and inspirations—as well as vast amounts of information—are absorbed in such a short amount of time. However, if the event is truly transformational, what you experienced will reverberate throughout your world for quite some time. I have a deep suspicion that this will be the case for me after attending the Openlab workshop.

Described as “a solutions lab, convener, and consultancy designed to accelerate the speed and impact of transformational change in the GLAM (gallery, library, archive, and museum) sector,” Openlab puts a lot on its plate. The idea that all of these organizations should work collaboratively to make their resources free and accessible isn’t a new one (my fellow members of the GLAM-WIKI US Consortium Advisory Board can attest to this), nor is the concept of a “lab” (there were 70-plus entities by Openlab’s count).

What does feel unique is the application of what Michael Edson describes as the “openlab change model”: by identifying five distinct patterns in which change happens in these organizations and by identifying and taking advantage of them, you can send the process of change into hyperdrive.

Gathering a bunch of people into a room to discuss the issues of GLAMS sharing access to resources for several hours may not sound like rocket science either, but having done that a time or two (hundred? thousand? I’ve stopped counting) this one felt different. For one, the guest list had me giddy. It contained more than a few of my favorite GLAM scofflaws and agitators, and that is meant with the highest praise. I also appreciated the fact that some attendees did not professionally represent the GLAM sector. Anyone who organizes conferences in these fields take note: please invite voices from outside. Seriously. More of this.

Echo chambers are a thing and it’s common to see nothing but heads bobbing in agreement over and over again during these conversations, with little to no pushback or challenge to what’s usually considered conventional wisdom. It was one of those unaffiliated voices that said what I consider one of my biggest takeaways from Openlab: “The problem is in the room.” 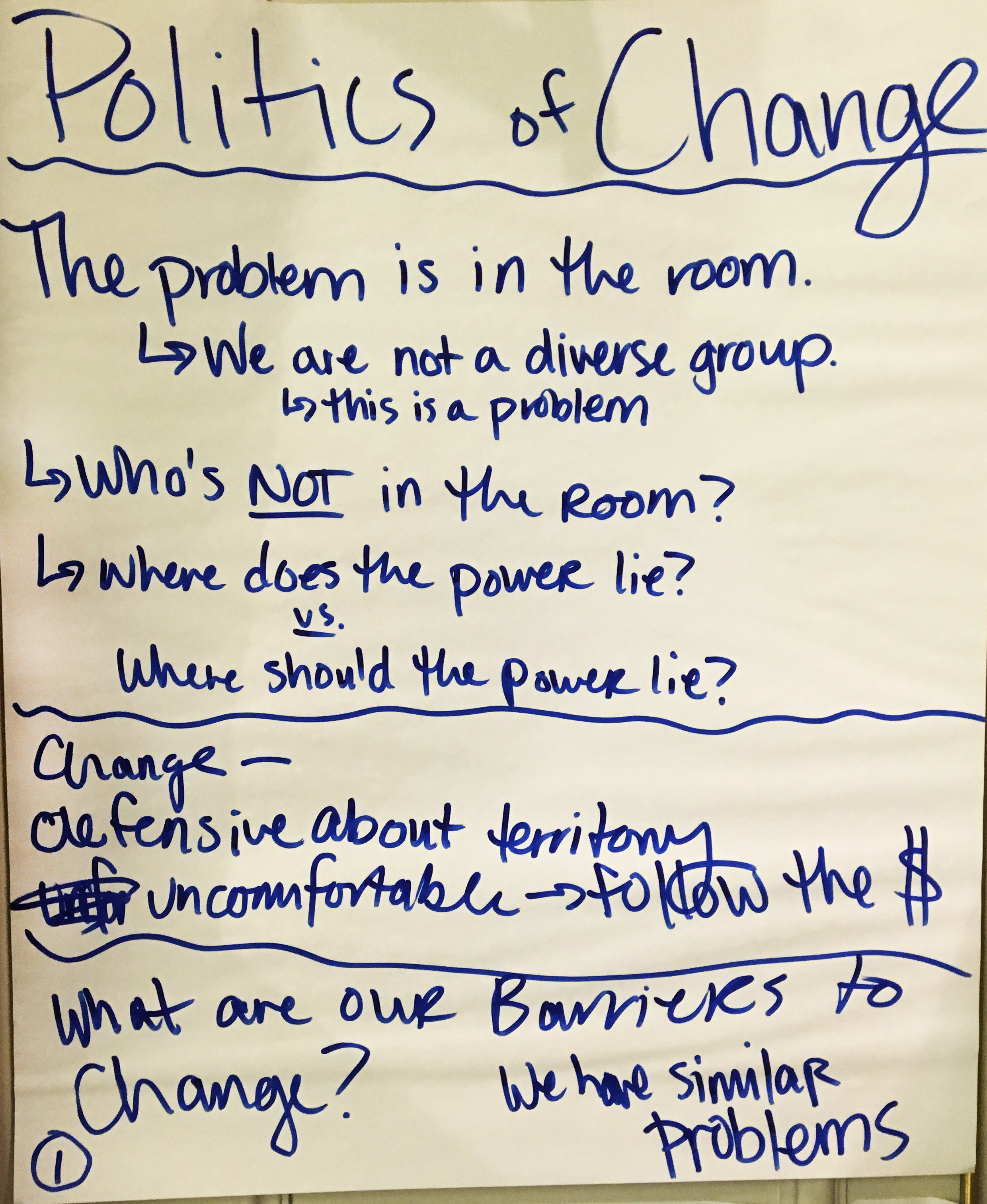 For the past year, I’ve co-hosted Twitter chats with Alelia Brown on the second Wednesday of each month at #museumsrespondtoferguson. The chats were created after a coalition of museum bloggers, Alelia and myself included, issued the Joint Statement from Museum Bloggers and Colleagues on Ferguson and Related Events urging collective action in response to the rising number of community movements addressing racial inequality and systemic oppression in the United States, many of which were born from the protests in Ferguson, Missouri, after Michael Brown, Jr. was killed by Darren Wilson.

In the Joint Statement, we asserted that as organizations existing in and claiming to act on behalf of the public, museums (and really, this can be extrapolated to GLAMs) should get involved in the struggle for social justice. How this can happen will vary for each organization, but before anything can be done in the outside community you have to look inside first.

From the Joint Statement: “Is there equity and diversity in your policy and practice regarding staff, volunteers, and Board members? Are staff members talking about Ferguson and the deeper issues it raises? How do these issues relate to the mission and audience of your museum? Do you have volunteers? What are they thinking and saying? How can the museum help volunteers and partners address their own questions about race, violence, and community?”

Essentially, we were asking, “Is the problem in the room”? I submit that it is. It was at Openlab. And it will continue to be in every GLAM unless we get very honest and serious about addressing how we treat each other, how we deal with our respective humanity, and how perceiving the lack of it in others has an immediate and persistent harmful impact both in our workplaces and communities.

Simply asking people to engage in the smallest amount of self-reflection can be transformational. I’ve observed it this past year during the #museumsrespondtoferguson chats. I saw it happen during the Openlab unconference breakout sessions when we discussed the politics of change and community engagement. Instead of focusing so heavily on our programs, technical products, or hand-built deliverables, we talked about what it takes to become damn good humans.

Openlab was full of people intensely committed to their work. Many of us have heaps of education with even larger heaps of student debt to show for it, but are still driven to share our love of oddly obscure subject matter, fantastic finds, and breathtaking artworks even in the midst of a diminished economy. Nobody goes into this work to get rich, even though we all deserve to get paid (including our interns!), but to that end, I also would hope that no one goes into this work to be harmful either. Demanding that those of us who work with GLAMs be better and do better isn’t a tall order, and belief in social equity and free and open access to knowledge should be a prerequisite. If any of those concepts seem outrageous to you, please find something else to do. Don’t take a job in service to humanity and then work in opposition.

Overall, I’m intensely thankful for the Openlab experience, the people I met during my brief stay in D.C., and those who worked so hard to care for us during those whirlwind two days.

Adrianne Russell is a museum evangelist, writer, and nonprofit consultant. She has written and presented about the intersections of art, race, gender, equity, inclusion and culture for Temporary Art Review, Smithsonian Magazine, The Museum Life with Carol Bossert, Museum Computer Network, and her blog, Cabinet of Curiosities.