Before I started my 22-month job as a textile cataloger, my knowledge of Pennsylvania German culture was limited to the dandelion and hot bacon dressing salad we had at Thanksgiving, and the joke my mother used to tell; “Kannst du micka funga? (Can you catch flies?) “Ja, wenn de hocka bleiben” (Yes, when they sit still). Now after 16 months on the project, my appreciation for a dying culture—my dying culture—has been revitalized, thanks to the amazing artifacts and communal spirit between the three institutions I work for.

In early 2012, the Mennonite Heritage Center in Harleysville, Pennsylvania, the Goschenhoppen Historians in Green Lane, Pennsylvania, and the Schwenkfelder Library & Heritage Center in Pennsburg, Pennsylvania, were the recipients of a CLIR Hidden Special Collections and Archives grant. The grant supported joint cataloging of the three institutions’ textile collections and the publicizing of this endeavor through an online and searchable catalog. This project was designed to be a collaborative effort with the three sites sharing the hired cataloger, i.e., myself.

One would think that in working on a joint project there are bound to be problems, but so far, we have been very successful at working together and helping each other out. Communication has been the most valuable tool in achieving our goal. We have monthly meetings, in which we plan, schedule, and brainstorm about not only the process of cataloging, but also how we want the end product, the online catalog, to look. This deliberation has allowed the three very different historic institutions to maintain a consistent and standard approach in the cataloging of their objects, including the descriptions and images. 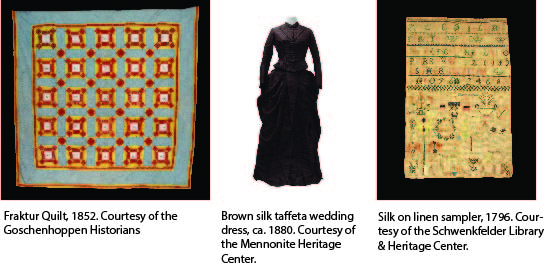 In case anyone is unfamiliar with cataloging and what that entails, my daily tasks are to locate the objects in the storage areas, bring them to the cataloging area, carefully unwrap the artifact, and either lay it flat on a table, climb a ladder to hang it on a metal frame, or dress a dress form. Then, I take photographs and record information about the object. Before starting the cataloging process, I traveled to the Winterthur Museum, Garden and Library to meet with their catalogers. They provided insight into their own cataloging methodology. In turn, the three sites had to discuss what worked for our particular project.

Because of time constraints, we had to decide, collectively, what components of the objects we felt were the most important to catalog, such as size, fabric, and other characteristics. Agreeing on which features to include allowed the cataloging process for the three collections to be as cohesive as possible, which personally, helped me stay efficient, but more importantly, will help the researchers using this catalog. While additional time might have allowed us to catalog in greater depth, we are giving people a taste of the collections, which might prompt them to visit, something we would definitely like to see happen.

Photography has also been important, as pictures are the first thing people see. Each location has had different challenges to overcome; lighting, backgrounds, dress forms, space, even ceiling height (we had some really, really long quilts). As a result, Photoshop has become my best friend, and now the images of the three sites appear consistent, adding even more synchronization to the project.

Each institution has tried to accommodate the other’s restrictions or events; whether it is an upcoming fundraising festival or the lack of air conditioning in the summer, we have worked together to find a compromise or solution. For example, Schwenkfelder opened its doors to the Goschenhoppen Historians, allowing them to transport and store their textile artifacts to Schwenkfelder for cataloging and photographing. Backdrops, dress forms, quilt frames, cameras, and even interns, who traveled with me to different locations, have all been shared. Without the strong relationship among the three organizations, there is no way that the cataloging could have gone as smoothly as it has.

The hardest part of this whole cataloging process has been setting priorities for what to catalog and what to forgo, temporarily. Twenty-two months seems like a long time, but when you’re working with large objects, such as quilts and coverlets, and with large numbers of household textiles and clothing articles (more than 1,500), time can really fly. However, the collection managers and curator at each site know their collection inside and out, and together we have consciously thought about and selected artifacts that best tell the story of the Pennsylvanian Germans.

This has been an exciting but busy time. I am never short of something to do, and I am very fortunate to be able to assist in preserving and publicizing the Pennsylvania German culture. This grant could not be more apropos, because we really are opening the door to a world of hidden treasures. The result of the project, the three searchable online catalogs, will be a unique research tool, demonstrating the variety and splendor of the three textile collections, as well as the successful collaboration between the Mennonite Heritage Center, the Goschenhoppen Historians, and the Schwenkfelder Library & Heritage Center.